Traditionally made by hand, the hand hem-rolling is at the heart of the know-how of hand sewing. 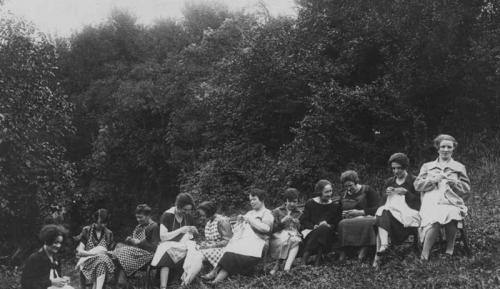 Back in these days, weaving industries did not work directly with "roulotteuses" (craftspersons, usally woven, specializing in handmade hem-rolling) ; instead, they worked with independent distributors, that would spread the hand work amongst families of their choosing. These distributors were then paid a percentage of the roulotteuses's production.

While today there still are a handful of roulotteuses in france, distributors have almost disappeared - the last one, working for Simonnot Godard, having retired in 2003. the process has been traditionally a teamwork effort, complete with a very friendly atmosphere.

Beyond the hem-rolling, there was also a need for people to cut pieces and to iron the finished handkerchief, pocket square, or scarf, before boxing the item.

Unfortunatly, the highly-specialized skill set of the roulotteuse, are on the verge of disappearing. Simonnot Godard currently employs 2 specialty - skilled workers. We wholeheartedly support and work towards promoting new people to preserve this precious of Savoir-Faire.

The art of hem-rolling : the rules